Last week a friend’s Dominique chicken got attacked by the neighbor’s hound dog.  The dog was put in a small cage to reflect on his abrupt actions through the rainy night.  The chicken…well, she had a fist-sized wound under her right wing; basically, the skin had been scraped back and a large amount of muscle was exposed.  Luckily, chickens don’t seem to bleed much.

I was inside when this happened.  I heard our friend Ben shout…and shortly after I heard another friend Phillip’s feet bound up the wooden steps outside.  He grabbed my skin salve and said he was going to doctor an attacked chicken with it.  I said “wait, wait, wait…whoa…slow down…That’s not what the chicken needs.”

I had doctored my cat a few times with herbs, but this scenario was new for me.  Luckily, most animals are fairly similar in what they can ingest or come in contact with.  There are some exceptions…but these are fairly rare.  So, I dug into my bag of tricks.

First, you always want to clean the wound.  I made tea from yarrow (picture below).  Yarrow is well-known for first-aid wound washes — anti-microbial and anti-inflammatory…and it helps to stop the bleeding (you can chew the leaf if you’re out on a hike and apply it to a cut like an herbal band-aid).  It’s strong anti-microbial properties are very good for the germs that can be found in the gums of the biting animal — which many times cause the wound/bite to become infected.

While we waited for the yarrow tea to cool to warm (but not hot), we washed the wound with a solution of turmeric powder (below) and water (slightly warm).  We talked to the chicken calmly and moved her slowly when washing her wound.  Turmeric is also a potent anti-microbial.  It’s also well-known for almost any kind of skin ailment from sunburn/sun protection, lessening skin wrinkles, and skin traumas, swelling and infections of all kinds.

10/5/2017 – Since writing this blog years ago, an herbalist from India chimed in below in the comments section (you can read her entire comment below) about the use of turmeric in India.

She writes, “In India, many people understand that turmeric keeps the body from “memorizing the trauma.” If someone is traumatized, a big dose is given immediately, with some pepper, in warm milk. If there are external injuries, turmeric can be applied right into a wound. Or a poultice can be made with ghee, which carries healing components into the body. This works wonderfully on bruises, as well, which will then heal with just rosy circulation, vs. the black and blue of stagnant blood.  Turmeric is our #1 first aid herb.” 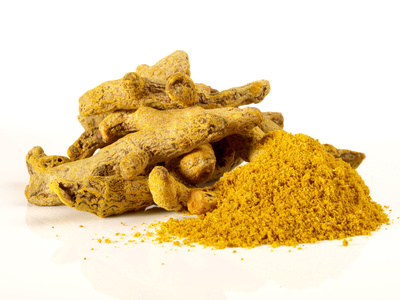 The chicken was very receptive to both treatments and stayed fairly calm.

We then put her in a cozy box (that could fit 4 chickens rather snug) so that she had space to walk (well, limp at this point) and yet feel protected.  Ben put some water and food in the box.  I also took a dropper and fed her some of the turmeric mixture for internal support as well.  Turmeric boosts the immune and energy system of any creature.  We then covered the box with a window screen so that she could rest.

Ironically, it was Ben’s veterinarian’s dog that had attacked the chicken.  While he spoke to her about resolving the issue and getting the dog back to her, they also talked about the chicken.  She said that if the chicken didn’t die shortly after the attack, that she was in very good shape — she had the will to live.

Right after he told me about that conversation, I went over and looked at the survivor chicken.  The will to live…  Basically, the chicken could have been shocked/traumatized so much by the incident, that she could have lost the will to live…  The extent of the wound wasn’t as relevant — at this point — as her “will to live.”

This reminded me of what I learned of traditional Mexican curenderas.  They knew that during a time of trauma, the soul is shocked out of the body.  Of what I understand, their work is to create the energetic and spiritual environment to encourage the person to invite that soul back into their being so that they may heal and live.  A major tool for this is for the curendera to create a harmonious environment — beauty, really — around this person.

So, the chicken really inspired me with her own unique chicken-will…  She stayed calm for a few days and didn’t move much. After about 5-6 days, she was moved outside to the chicken tractor to be with another chicken.  After a a couple days in the tractor, she laid an egg (normally, chickens lay one egg a day and she had stopped laying).  Her limp went away shortly after that…and the wound healed up with a nice, protective layer of skin (no feathers yet).

This has me reflecting on the nature of trauma…  More and more research is revealing the nuances of trauma recovery.  In Peter Levine’s book “Waking the Tiger:  Healing Trauma,” he talks about wild animal’s ability to shake off trauma as soon as the situation is clear that the animal is safe (meaning the deer safely got away from the coyote).  Mammals have something called the ‘neocortex’ — a part of the cerebral cortex.  Those in the ape family…and we humans…have more surface area of the neocortex, basically a larger one than other mammals (and something bird and reptiles are said not to have).

It is said that this part of the brain handles our ‘fight, flight, or freeze’ mode (along with other functions such as language and such).  What Levine says is that when a human is traumatized, this neocortex tends to lock the body into the moment of trauma — certain aspects of the trauma get stuck.  So, through awareness, Somatic therapy, dream-work, acupuncture, and other modalities — the trauma can finally release from the body’s neuropathways. 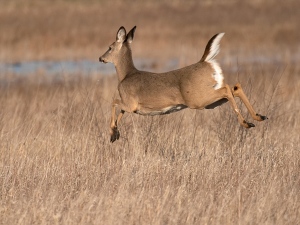 A Traditional Chinese Acupuncturist explains it here (copied from this site):

“The fight-or-flight response to trauma is well known. Another common response, and one which can be equally effective, is to freeze. When the trauma is such that one feels impotent or powerless, and the defense mechanisms of fight and flight are blocked, then freezing may be the only remaining option. When no immediate escape is possible and the emotion is overwhelming, we often “numb out,” or lose touch with our feelings. The mind shuts down, and we become dissociated from reality. Things may seem to be happening in slow motion, or we may even be unconscious.

At the time of the trauma, freezing can be a great survival tool. Physically freezing, or remaining motionless, can save our lives in situations where one more step could bring disaster, or one little noise could invite attack. Many animals employ the defense mechanism of freezing, because most predators recognize prey by their movements, and may bypass an animal which is motionless. The opossum is best known for feigning death when attacked, as reflected in the phrase “playing possum,” which is defined as pretending to be asleep, dead, ill or unaware. During trauma, we don’t have to pretend to be unaware, because dissociation and shutting down feelings are normal parts of the shock response.

However, immobility also means constriction of the organism. Freezing means that the fight or flight response has been thwarted. The energy which would have been discharged by fighting or fleeing is bound up in the nervous system. After the threat has passed, animals generally discharge this energy through muscular movement or sound, and then return to normal functioning. In human beings, the highly developed neocortex can override completion of instinctual responses, and feelings like fear, anger, hatred and rage can build up until they overwhelm the nervous system and we collapse or freeze again. A main problem with maintaining the frozen posture is that it requires chronic muscular tension, which does not help us feel healthy and happy. When parts of the body are immobilized for a long time, or if mobility is extensively limited, this affects circulation—not only of blood and lymph, but also (and first) of Qi or energy.”

Through my 10 years of working with at-risk and low-income communities (and healing through my own traumas), I can’t help but realize that we are in a rather traumatizing culture.  Children in inner-city neighborhoods are being diagnosed with PTSD (post-traumatic stress disorder) on levels similar to returning war veterans.  Domestic violence is rampant in this country — meaning women and children (and probably the men carrying out such horrible actions) all have PTSD and are without the tools and mechanisms to fully heal.  People who are in car accidents are given very little time to fully heal because of lack of information about the ideal healing time for such incidents and/or the inability to heal because of time and financial pressures.

Further, traumas can also be persistent and low-level.  Meaning that if a person is in constant alertness because of the nature of their environment (unstable home, for example), they will eventually override certain natural mechanisms that maintain balance in the body.  This will lead to a fight, flight and eventually freeze…if the situation cannot be remedied.  Just think, humans used to work in tribes and gather and hunt for food in the wild.  They relaxed a lot and rested.  When it was time to hunt or be hunted, they became alert and responded to the event.  In modern times, the chronic alertness and arousal can be debilitating.

I went out to visit the chicken a few days ago.  I found a feather of hers by the chicken tractor she was in.  I call her the ‘survivor chicken.’  I felt like this was the perfect feather to stick into the side of my herb pickin’ basket — the will to live feather.  To me, this feather is a reminder of the many people who have PTSD and are healing through it the best they can in this modern world.  Blessings to you all…

9 thoughts on “The Will to Live: A Chicken Healing Story”