When I moved to Santa Barbara, CA with my family, just this past April, I quickly took note of a tree that reminded me of weeping willow.  It’s furrowed trunk greatly contrasted, the light feathery leaves that fanned the air.  And, it was everywhere around Ojai and Santa Barbara.

There is even a Pepper Tree Retreat Center in Ojai.  This place echoes with the legacy of the spiritual philosopher, Krishnamurti, offering meditation retreats.  I walked the grounds of this place after doing a short interview and again…contemplated on the nature and gift of this tree.

I know some planty people have a knee-jerk reaction to invasive plant species.  However, I urge folks like this to soften their perspective and even shift their perspective.  Typically, the plants arrive to help with an imbalance — both in nature and in our bodies.  Invasive plant medicine is actually some of my favorite medicine to work with.  It is readily available…begging to be used…and I can typically take as much as I want.

(Note:  Brazilian pepper tree and Peruvian pepper tree can both be found in Coastal California and Desert California areas.  To my knowledge, Brazilian is an ornamental used in landscaping and Peruvian is both an ornamental and a rather feisty invasive tree that you can find in the wild and in landscaped areas.  Both species could potentially cause severe allergic reactions in certain people.  If you are allergic to plants in the Anacardiaceae family such as cashews and mangoes, I would not use these trees.)

After going on a walk around our neighborhood the other day, I came across the thick, gnarly trunk of a pepper tree, pouring itself over the sidewalk.  It must have been 100 years old.  I noticed resin oozing from the trunk.  I knew that this resin indicated very powerful anti-microbial properties.

After moving in close to inhale the scent of the camphor-like smelling resin, I harvested a piece to take home with me.  I offered a few strands of hair as a gesture of gratitude.

It seems that there is not much information out there about this tree.  However, I did learn that it is called Peruvian Pepper Tree (Schinus molle), and as the name implies…it is from Peru.  It is an evergreen tree and a member of the Anacardiaceae family (the same plant family as sumac, mango, and cashew).  I would imagine that the Spanish colonizers brought the tree up this way?  Or, had the First Peoples already moved the tree up this way? 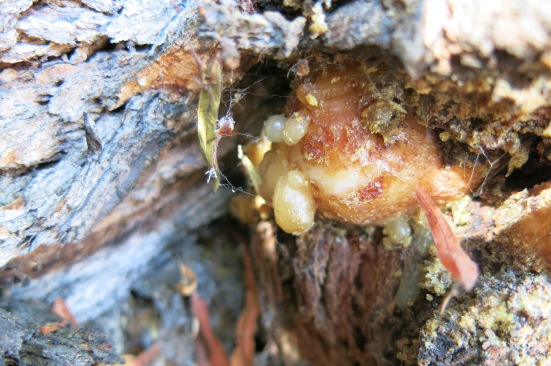 Resin oozing from the Peruvian pepper tree (PLEASE BE AWARE that resin is the “scab” on a wound of a healing tree.  Never take too much and make sure that there is a thick coating of resin protecting the tree from infection.)

I did come across this blog post that was written by an herbalist that had spent time in Peru.  Apparently, this tree was commonly used by the medicine people in cleansing ceremonies.  This makes complete sense to me given its strong anti-microbial properties.

“In traditional medicine, S. molle was used in treating a variety of wounds and infections due to its antibacterial and antiseptic properties. It has also been used as an antidepressant, a diuretic, for toothache, rheumatism and menstrual disorders, to stimulate menstruation and to stimulate the uterus.

Other traditional uses include: candida, muscle spasms, anti-inflammatory, anti-viral, anti-fungal, astringent, tonic, regulate heartbeat, stimulate digestion, lower blood pressure, increase urination, mild laxative (sap), reduce phlegm and heal wounds. Parts used are the bark as a decocotion, the leaf as an infusion or the bark and leaf as a tincture. In Peru the entire plant is used externally for fractures or as a topical anesthetic.

The oleoresin is applied as an external wound healer, to stop bleeding and taken internally for rheumatism and as a purgative. The fruits, seeds, resin and oleoresin or balsam have been used medicinally by indigenous people throughout the tropics. In South Africa, a leaf tea is used to treat colds, and a leaf decocotion is inhaled for colds, hypertension, depression and irregular heartbeat.”

It’s interesting that she mentioned that the pink peppercorns were used to make a gruel that was fermented into chicha.  She said maize is used now.  But, I know that quinoa is also used.  The pink peppercorns can also be used as spice.  However, the fancy, commercial pink peppercorns you see are actually from the Brazilian Pepper Tree.

On another walk, this time with a friend, we came upon another great grandfather pepper tree and she started talking about it.  She infuses the spicy pink peppercorns into raw cacao treats she makes.

She also mentioned that, in Mexico, they use Peruvian pepper tree leaves in traditional Temazcal sweatlodges and steams.  Considering its anti-microbial actions on the mucous membranes and its expectorant properties, a steam of this herb would be divine for any respiratory infections or colds.  As well, since it is warming, I’m sure this would be great for arthritic conditions…

I had to look up temazcal on the internet and find a picture.  I came across this cool image of a traditional Mayan temazcal that was preserved under volcanic ash for hundreds of years.  It’s located in El Salvador and was discovered in the 1970s, I believe.  The temazcal is part of a rather intact archeological site, called Joya de Ceren, that continues to have research and excavations done. 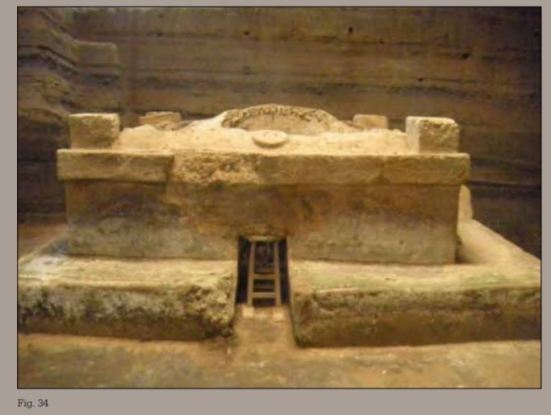 I decided to work with the pepper tree after finding some Melilotis alba (white sweet clover) and Liquidamber styraciflua (sweet gum), as well.  Considering the warming effect of pepper tree, I thought I would combine it with melilotis for pain relief (also good for muscle tension and knots), and sweet gum, which is also warming and traditionally used for arthritic conditions in the Deep South.  They all smell amazing, too.  Melilotis gives off a vanilla-like scent when crushed.

The salve smells heavenly…  The vanilla melilotis smell is being serenaded by the more subtle resinous smell of pepper tree.   I was a bit surprised that the pepper tree smell didn’t overpower the salve.  It didn’t at all…melilotis is definitely more noticeable.

Herb with olive oil pressed out

I soaked the herbs in olive oil, pressed the oil out of the herbs about 6-8 weeks later.  I then simmered the oil on the stove in a make-shift double-boiler (love me some pyrex), added some of the powdered pepper tree resin, beeswax, and a small bit of pastured lard, and then poured it all into containers. 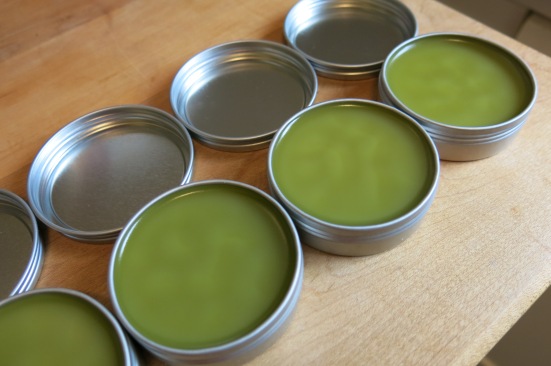 The salve would be great for joint pain and muscle pain due to injury, arthritic joints, and even wound healing (minor cuts and scraps).  I normally use St. John’s Wort for nerve pain, but I’d heard of other herbalists using melilotis, so I wanted to give it a try.  And, I’ve used sweet gum for arthritic joints in another mixture of herbs, so I can definitely speak to its effectiveness…

I haven’t used it yet (or had others use it), so I’ll report back!

Deep South bioregional incense using pine resin; image taken before breaking off into chunks; incense was placed in a lit charcoal round that was placed in a bowl of sand (heavenly scent!)

I also plan to explore using the resin in a bioregional kyphi incense.  I started making kyphi incense about 6 years ago after reading an inspiring blog by herbalist, Kiva Rose.  In the Deep South, I used the readily available pine resin.  In California,  I plan to experiment with pepper tree.

If any of you have used pepper tree, please comment below!

7 thoughts on “Peruvian Pepper Tree and Why Invasive Plants Matter”