“Every part of Creation is indebted for its life to the other parts of Creation that have died and decayed so that it might live.”
~ Jessica Prentice, Full Moon Feast

The past couple of days involved a recent kitchen experiment — rendering lard.

While rendering the lard (purifying the lard), I couldn’t help but think of my friend Marion Sansing from Starkville, MS.  When I returned to Mississippi to live, I met Marion early on.  This German-born gal became someone I could geek out with on all things foraged, homegrown, and hand-processed.

Eventually, we even crafted a year’s worth of monthly, local, whole foods meals for others to enjoy.  We named them, Seasonal Soirees.

Marion and I at our Mediterranean inspired soiree

One thing that Marion did every late fall was process the deer her husband and son harvested from the wild.  She would make sure to use every part of the animal, like the local First Peoples did.

She would also render the fat into beautiful, pure white blocks…wrap them in parchment paper and store them for future use.  Whether making a deeply hydrating hand salve or cooking vegetables or preparing liver pate or making soap…Marion found a way to utilize the precious fat.

She made gifts of fat, as well.  Some of my favorite gifts were from her were carefully wrapped blocks of rendered deer fat or tallow from a pastured cow.

Since moving back to California, it’s been hard to find real, pastured or wild fats.  A friend, knowing I was in search of fat, purchased some duck fat from a local butcher in Ventura, CA.  Other than that, I haven’t been able to find any.  The local Whole Foods in Santa Barbara only carries duck fat in the Winter months around the holidays.

So, inspired by Marion, I decided to make my own.

Remembering what I had been taught by traditional food educators, I went out in search of pig fat, high in Vitamin D.  It is said that pastured pig lard is higher in Vit D than pastured cow butter.  One of the purposes of this precious fat is to prepare my little one’s vegetables in the fat, so high Vit D content is important to me.

As well, in all cultures, wholesome fats were regarded as special, if not sacred.  Many food educators are trying to heal the knowledge wound we have in our culture around fat.  When Big Sugar took a hold of our culture, it demonized wholesome fat.  Basically, a quick buzz replaced the enduring, sustaining energy that fat gives us.

Soon enough, in the nutrient-dense, traditional cuisine of the Deep South, rendered lard was replaced by hydrogenated oils — that’s right — Crisco, a fake fat.  And, there are many traditional foods that have met the same fate.

“Fats from animal and vegetable sources provide a concentrated source of energy in the diet; they also provide the building blocks for cell membranes and a variety of hormones and hormone-like substances.  Fats, as part of a meal, slow down nutrient absorption so that we can go longer without feeling hungry.  In addition, they act as carriers for important fat-soluble vitamins A, D, E and K.”
~ Sally Fallon, Nourishing Traditions

Back to my kitchen ramblings, then…

I plan to also use the fat for crusts, crackers, and topical salves and balms (here’s a pine pitch salve I made awhile ago with Marion’s beef tallow).

You can read more about the benefits of pastured pig lard here and here.

There are plenty of blog posts out there about how to render lard, but I thought I’d share my experience through photos…  It was truly satisfying to cut the pure, white lard into blocks…wrap it in parchment paper and store for later.

Immediately, I thought of people I could gift it to…just like Marion gifted this nourishment to me… 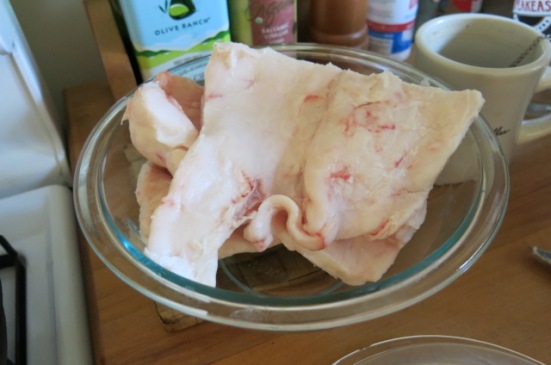 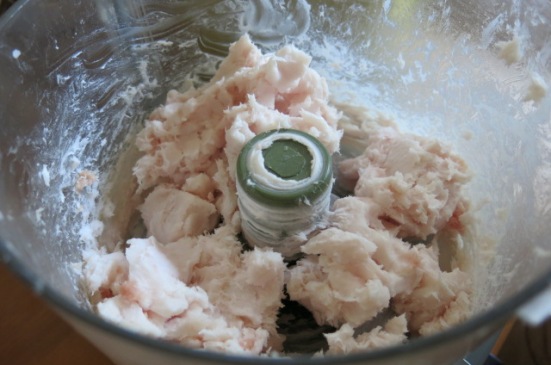 Trusty crock pot set on low for about 3-4 hours 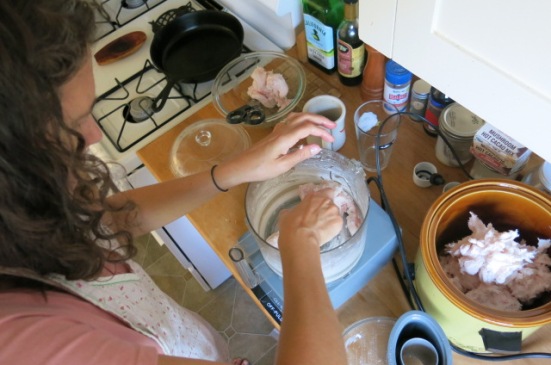 Strained the cracklins (see below) through a fine stainless sieve and refrigerated until solid (about 2 hours, was it?)

I cut the lard into squares and then put it in the freezer (in the pyrex dish) to harden so that it would be easier to remove from the dish; I then wrapped them in parchment

Cracklins strained from the liquid fat/lard 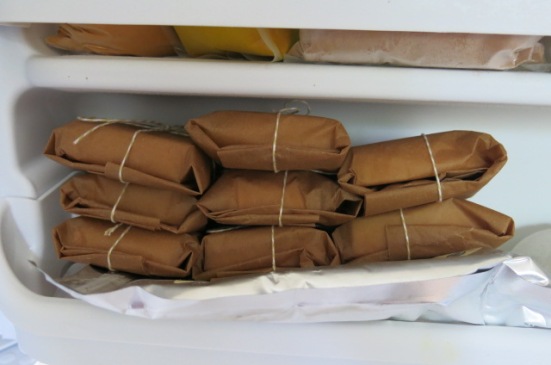 Lard ready to use or gift (stored in the freezer)

I fried the cracklins in a skillet and strained the excess fat into my bacon grease jar.  As far as I’ve read, you can store these in the fridge for 2-3 days and store them in the freezer for 2-3 months.  You use these crispy, tasty fried cracklins to garnish dishes!

SIDE NOTE: The best part of this story (well, to me) has to do with my little one.  I’ve been trying to teach her to sign to me “more” by pinching finger tips together and bumping her hands together.  This sign can be very helpful when trying to figure out what they want to eat more of.

Well, the first time I’ve been able to get her to sign “more” was for more cracklins!

11 thoughts on “Lard and Kitchen Memories”