With the little one on its way…I’ve been obsessing about fabrics, textiles, and yarns.  As an herbalist and plant-worker, I’ve always been drawn to natural fibers and plant dyes, but this nesting season has taken it to a whole new level.

In addition to this, my increasing awareness of microplastics has deepened my commitment to natural fibers.

The first time I ever heard of microplastics was when I was in graduate school for Geography, around 2005.  One of my more aquatic-oriented classmates was doing her thesis on this topic.

It was eye-opening to learn about the insane amount of plastic floating around in our oceans.  According to this article, “Up to 236,000 tonnes of microplastics – tiny pieces of broken-down plastic smaller than your little fingernail – enter our oceans each year.”  These plastics are known to be toxic, attract toxins and bioaccumulate in living creatures in our oceans.

I lived in San Francisco, CA at the time I was in grad school.  The city was (and is) actively working toward a Zero Waste plan.  While living there, I always had a green bin (composting), blue bin (recycling), and black bin (trash).  It was rare that the black bin filled up.  However, San Francisco (for the US) is an exception, not the rule when it comes to managing and educating about waste.

About that time, I remember going to hear Chris Jordan talk about leaving law and becoming a photographer.  He shifted into this new work and spent 100% of his time educating about waste and industrial pollution.  His work, Running the Numbers is jaw-dropping.

He now has a documentary film out on albatrosses and their exposure to plastics and plastic consumption.

One thing I wasn’t aware of until recently was microfibers.  The Story of Stuff has been doing a great job of educating people about the impact of plastics-based fibers that are so popular (oddly enough) in the outdoorsy, fitness, and yoga community (think fleece, stretchy pants, and even capilene layers).  If you click on that link I just provided, you can watch a 5 min video and also sign a petition to urge manufacturers to stop using plastic-based fibers.

Basically, every time we wash one of these plastic-based fiber clothing items, thousands of microfibers make it into the waterways and into the living creatures…and yes, eventually us.

The article linked to above reads, “the sheer scale of the problem is immense—in the United States alone, it is estimated that there 89 million washing machines doing an average of nine loads of laundry a week. Each load can emit anywhere from 1,900 fibers to 200,000 per load, a nightmare scenario. Though wastewater treatment in developed countries catches a large portion of the fibers in the processing of sewage, the solids in which those fibers are captured are often land applied as fertilizer. So, we’re adding synthetic fibers to our soil and our sea at the same time.”

And, to add to the fashion waste discussion, there are other things to consider:

So yeah, the entire plastics industry and fashion industry is a bit overwhelming.  And while the big machines continue to churn out disposable clothes and people continue to try to keep up with the elusive current fashion, the planet and all of its life forms are simply choking on it all.

There are some cool initiatives out there, like Break Free From Plastic, but largely, we have to educate ourselves and demand other products (and make them, too).  And, there doesn’t seem to be any advocacy group really taking on the fashion industry, though.

To me, we’ve lost our weavers, our seamstresses, our plant dyers, our yarn-makers…to this steady hum of the machine.  It started around WWII and escalated in its aftermath.  I believe that I learned that standardized clothes sizes were a product of WWII and, with that, a gradual loss of our textile artisans and crafters.

With that, we’ve also lost stories…relationships…and a connection to the basic elements of life.

I don’t think we could have gone without them for much longer.

I’ve found myself rolling around a bit in all of this lately, as I mentioned at the beginning of the article.  There is something so special about the way a fabric feels, smells, looks.  I think my ancestors had much fewer pieces of clothing that were much better quality than I have today.  So, I’m on a journey to simplify and reconnect with fabrics in a way that cherishes them.

Here are some of my recent fabric doings and findings:

I took an old 100% wool blanket of my great, grandmother’s and cut it up into smaller squares.  One square, I added cuttings from an old bandana I used in the back-country when camping.  I also did a blanket stitch around the edges.  This was new for me as I’m more of a sew-a-button-back on kinda person.  However, this particular great, grandmother of mine was a seamstress in Mississippi, so maybe she inspired all of this.

The other squares I left plain-edged and lanolized them so I could use them as puddle pads for the baby. 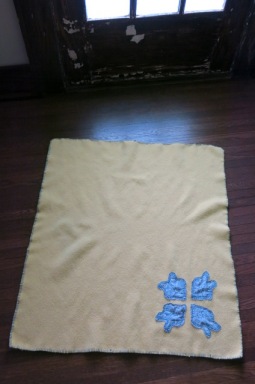 My mother-in-law is a super crafty knitter.  I sent her some llama yarn from a local farm called Red Clay Farms.  They sell alpaca, sheep, and llama yarn in their natural state (no dyes).  She made some really adorable things for the baby. 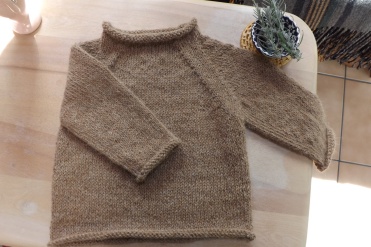 I’ve made a couple of trades recently, as well.  Which, I love to do.  Basically, I traded some of my herbal formulas for some crafty creations from a couple of artisans.  The first trade is still in the making.  This artisan carded, spinned, and dyed this yarn and will soon knit it into a baby blanket.  It’s local sheep wool that she dyed with osage orange (or bois d’arc).

Update (11/29/17):  I just received the baby blanket in the mail from this crafter.  She knitted the bulk of the blanket with the osage orange dyed wool yarn and then finished the edges with undyed yarn from a heritage breed of sheep called Gulf Coast Native Sheep.  These sheep were originally brought over to the Americas by Spanish explorers (ahem, colonizers). 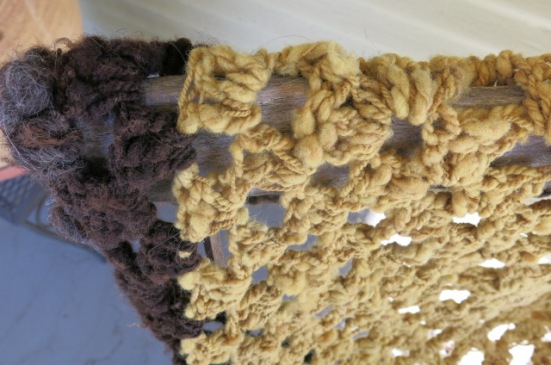 My other trade was with a women that works a lot with plant dyes as well.  She dyed this silk shirt with onion peels, rose, sumac, and eucalyptus.  I’ve taken a plant dye workshop with her in the past and it was incredibly fun.  Considering that I work with plants so much in herbalism, I often have plant scraps that could be used to dye things.  Last time I made black walnut tincture, I had extra green hulls left-over that I used to dye a white cotton shirt.  I wouldn’t have even thought to do that had it not been for her workshop.

Front of the plant-dyed silk shirt

Over time, I hope to continue supporting textile artisans and experimenting a bit myself (Etsy is a great place to find artisans work with natural fibers as well as upcycle fabrics).  Other than that, I pledge to shop at consignment stores and thrift stores as much as I can to keep fashion consumption down.  I also pledge to just wear what feels good and totally stay out of fashion (smile).

I hope that my clothing choices will continue to contain more stories…more magical relationships…more wholesome connections with life.  I find it’s just one more thing I can do to stop the mechanical godzilla soul-slayer.

3 thoughts on “Fibers That Won’t Choke The World”