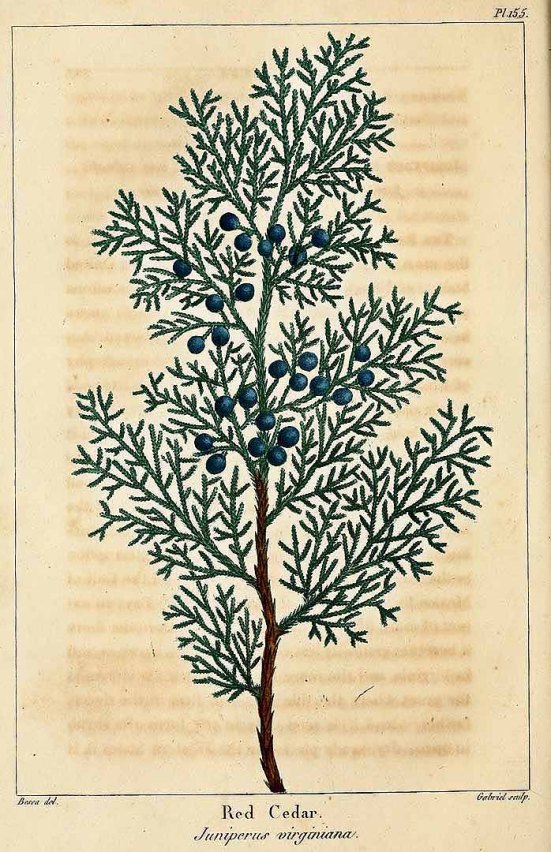 I have to pay homage to this amazing plant ally, especially after its generous gift to me after a recent and intense car accident.  Eastern Red Cedar (Juniperus virginiana) is quite prolific in Mississippi, where I live.  It is a common and vigorous pioneer species, found along roadsides and also in deforested areas.  It is one of the early succession trees when a forest has been cleared or land has been greatly disturbed.  With this in mind, some initial clues to the nature of red cedar’s medicine is revealed.

In certain areas of Mississippi, especially central MS, this tree is almost weed-like it is so common.  Considering its presence and over-abundance, really, I feel that this is a sign use this plant and to be in relationship with it.  It’s almost like it is shouting at us saying, “Hey!  Right here!  I’m over here!”  If we begin to pay attention to this tree, we will soon find out that it has many gifts to offer.

When you approach a red cedar you can immediately smell the fragrant aroma of its branches.  You can pinch off some of its evergreen foliage and take a deeper inhale of its fragrance.  To me, it is nothing short of heavenly.  It has a sweet, resinous, evergreen smell that opens my senses up wide to receive.

And, it is this profoundly amazing smell that holds the richness of its medicine.  Let me share a few of stories with you.

Our journey will start in the Bay Area in California, where I first began studying about herbs around a decade ago.  In the West, there is a relative of the Eastern Red Cedar is appropriately named Western Redcedar (Thuja plicata).  They are from different genus’s, but are both evergreens of the Cypress family (Cupressaceae).

Early on, I learned that Thuja was a highly regarded among the tribes of the west.  I also learned that burning Thuja after a traumatizing accident or situation would help clear the trauma from the person’s system.  One teacher I studied with out west also taught me about its use as an intense immune stimulant (encouraging macrophage activity), its expectorant properties, and its warming nature.

Use caution if using during pregnancy.  And, it is not to be used if there are kidney issues.  It is useful in the treatment of lower UTI’s, but it’s important to use caution as the warming nature of the tincture can push the infection up to the kidneys.  There are other herbs that are easier to use for an UTI (uva ursi, cornsilk, goldenrod, and usnea being some of my favorites).  And, it’s anti-fungal properties can help clear up athlete’s foot and can be effective for warts as well.

All of these attributes are linked with Thuja.  However, I have found that Eastern Red Cedar has almost identical uses and properties.  I’m not sure of the exact chemical breakdown, but I have used Eastern Red Cedar in all the ways mentioned with positive results.

I have used the herb as a bath, steam, infused oil, incense, and tincture.  My favorite methods of working with Eastern Red Cedar (in which I will now only refer to as Red Cedar) has been a bath and incense which leads me into the most amazing moments I have had with this plant. 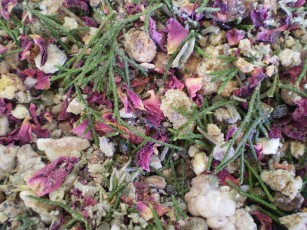 I was driving back from teaching a workshop in a town 45 minutes away from home.  I started to hear rattling claps of thunder followed by uncomfortably close streaks of lightening.  I was halfway home and I was driving right into the storm.

When I reached the city limit, rain began to pour down in sheets.  I could barely see the road and certain sections of road flooded quickly.  With the thunder booming and lightening flashing, I focused on the road and was determined to get home rather than pull over.

On the way home, water startled me by kicking up in waves at the bottom of my car.  My knuckles were white from clutching the steering wheel.  When I arrived home, I ran inside and panted until my breathing calmed.  I was really shaken up…  When I settled into bed, I remembered that we had just made some Red Cedar incense at the apothecary.  I remembered what I had been taught about its ability to clear trauma and shock from the system.

I lit the incense and laid down in my bed.  In a matter of seconds, the delicious evergreen smell of Red Cedar began to fill my room.  I took a deep breath and exhaled.  And, without hesitation, my eyes welled up with tears which rolled down my face.  My body took a deep exhale and my spirit stilled.  The shift was immediate.  I thought about this shift for some time and attributed it to the clearing nature of Red Cedar.

If you begin to learn anything about Traditional Chinese Medicine (TCM), you’ll soon learn that spirit (shen) resides in the heart.  When you are shocked, surprised, or traumatized…you can feel that part of you quiver.  Sometimes it gets full and pressure builds.  Sometimes it flickers and rattles in your chest.  Sometimes it leaves your body and you need to invite it back home.

The second powerful experience I had with Red Cedar is unforgettable and underscores its ability to do deep work in times of crisis, shock or trauma.

Like I mentioned at the beginning of the article, about a month ago, a friend and I were in a very bad accident.  A man ran a red light and T-boned our car on my side (the passenger side).  I did not see him coming and, when we were hit, I lost consciousness only to wake up for a brief moment in an ambulance.  Later, I regained consciousness again in the ER as I was getting a CT scan of my head.

Needless to say, I had quite an intense evening.  I chose not to stay in the hospital as I felt I could heal better at my friend’s house.  Intuitively, I requested my friend draw a bath of water and mix turmeric powder in there.  I also had a small container of turmeric powder and warm water that I poured over the right side of my head where the stitches and most intense trauma was located.

Yes, I stained my friend’s bathtub yellow from the turmeric.  I didn’t think about that at the time!  But, fortunately…lol…their tub was actually yellow colored already (funny how that worked out because this is the only yellow tub I know of).  Eventually, they told me, that the turmeric “ring” around the tub went away.

Later, I would learn the following about turmeric from a woman from India: “In India, many people understand that turmeric keeps the body from “memorizing the trauma.” If someone is traumatized, a big dose is given immediately, with some pepper, in warm milk. If there are external injuries, turmeric can be applied right into a wound. Or a poultice can be made with ghee, which carries healing components into the body. This works wonderfully on bruises, as well, which will then heal with just rosy circulation, vs. the black and blue of stagnant blood.  Turmeric is our #1 first aid herb.”

Even though this helped me sleep well that night, the next day I woke up nauseous, depleted, and tired and with a headache.  When my friend spoke to me or tried to hold my attention, I would get nauseous.  When I would drink even a sip of water, my intestines would grip and ache.

In the late afternoon, I remembered that there was a Red Cedar tree in the front yard.  I figured that my nausea could be due to my head injury, but I felt (due to the gripping in my intestines with the smallest bit of water) that my digestive system had shut down due to the trauma.  My system was in shock.  I knew Red Cedar had the medicine I needed to clear my system.

I asked my friend to simmer a stock pot half full of Red Cedar needles for 20 minutes in water and to draw me a bath.  We poured the water into the bath so that I could bathe in it.  When I lowered my body into the bath, I was again taken by the rich fragrance.  I took a bowl and poured the fragrant water over every inch of my body and repeated that action a few times.  I then rested in the bath for 15 minutes or so.

When I got out of the bath, I felt more alert and my mind felt clearer.  The shift was dramatic.  My headache started to wane and I started to crave some food which meant my digestive system had started up again.  I literally felt cleansed, refreshed, and “reopened.”  For my nausea and headache to shift to rapidly, I had gained another level of respect and appreciation for this tree.  Because I am grateful for its work on me, I wanted to share this…

Before I close out this blog post, I would like to outline some other ways that I have worked with this plant:

– A delightful tea of cardamom, hibiscus, and red cedar (a friend of mine loves what this does for her allergies and stuffiness)

– Infused in extra virgin olive oil with rosemary for an all-around massage oil (bringing warmth to the body in the Winter months, nourishing the cells with evergreen vibrancy, helping to break up knots in the muscles)

– A simple tea for lower UTI’s (fresh or dry)

– I have also paired this aromatic herb with burdock, dandelion, ginger, and orange peel to make a warming bitters formula

“The secrets are in the plants.
To elicit them you have to love them enough.”
~ George Washington Carver