Sometimes a person enters my life (and even though I haven’t met them), they go straight to my heart.  One of those people is elephant advocate, Carol Buckley.  She has entered my life at different periods — the first time, about 8 years ago.  And, the last time, last year.

Around 2003, I was into my second year in San Francisco.  I had a steady job and income.  I noticed that I started to become like that troll guy who says ‘my precious’ over and over on Lord of the Rings when I balanced my check book.  I was actually frightened of this part of my nature and dedicated myself to remedying this.  How?  By giving.  I started giving $25-50 a month to a charity or cause of my choice.  My first act of this devotion (and a few thereafter) was to The Elephant Sanctuary in Tennessee.

Carol was one of the co-founders of this sanctuary.  How I originally came upon this organization, I don’t even remember!!!  This sanctuary takes abused elephants under their wing; those that have been mistreated in circuses and zoos.  They rehabilitate them from the torture and abuse (most if not all) elephants experience in these places by giving them good food, plenty of space, lots of love, and skillful support.

Last year, I worked as the Retreat Manager at a silent, contemplative center in North Carolina called the Southern Dharma Retreat Center.  While there, I met some of the larger community.  One person I met was a former board member at SDRC, and as it turns out — at the Elephant Sanctuary.  She updated me on Carol’s life — she was off to Asia.  And, this woman proceeded to tell me a story about Carol that struck a deep chord within me.

Carol left Elephant Sanctuary probably around 2010 or so — I’m not sure exactly when.  Since she left Tennessee, she has been working in India, Nepal and Thailand with traditional elephant trainers.  In India, there is a designated caste, the mahouts.  While there, she noticed that the trainers used aggressive, dominating, and cruel techniques to get their elephants to obey them.  Carol was shocked because this was the exact training she saw the circuses of America use to train their elephants.

Carol asked the mahouts to give her a chance to use positive reinforcement with the elephants.  The woman from Southern Dharma told the story something like this:

Carol asked the mahouts, “You have known these elephants since they were young…and many of you since you were young, too — yes?”

They all said “yes.”

And, they kind of stood there…(scratching their heads)… 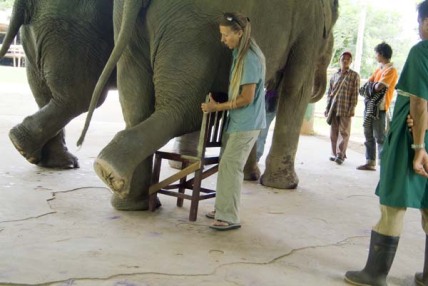 Carol proceeded to exercise some of her positive reinforcement techniques and the elephants immediately responded; the mahouts were definitely intrigued (the picture above is of her giving an elephant one of their routine pedicures).  The woman at Southern Dharma went on to say that the Indian government had even invested funds to teach their mahouts how to use positive reinforcement with their elephants…her blog has some early information on this (please read! amazing stuff).

And now, it looks like her work has launched Elephant Aid International.  An acquaintance of hers has a nice blog post on meeting her and experiencing her work.

On another level, her work is symbolic of the times we are in…the old, abusive patriarchal ways are giving way to positive reinforcement, curiosity, critical thinking, and compassion.  Whether it be paddling in schools (which still existed in MS when I was in school), the death penalty, animal abuse, or domestic violence — we are confronting the silent story of abuse in our world…one bit at a time.  I feel people are really beginning to look at things…and we have to because things are getting worse and we need to be open to alternatives in how to approach and resolve disharmony.

Does hitting take the fear and anger away?  Anger is easy to direct at someone or something because it is clear and crisp.  What is harder to direct is the uncomfortable and complex feeling underneath this anger.  That’s why, I think, anger is chosen first — because it’s just easier.  However, if we can train ourselves to look inward…to sit with our discomfort…and find the words to express to someone (or ourselves) how we really feel (meaning — the power of vulnerability)…we can transform the anger, entirely, into an action that is both life-affirming and loving — and very effective.

To me, that is Carol Buckley’s message — that every form of life deserves to be loved, honored, and nurtured.