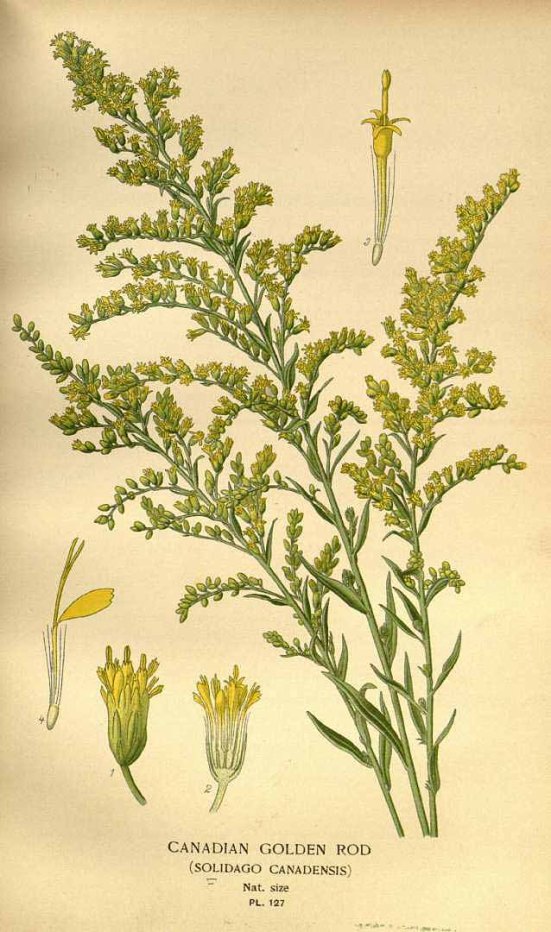 The Fall Catfish Alley magazine is hot off the press and with that, my recent article on goldenrod.  And, perfect timing, because she will be blooming soon!  In this post, I’ve shared the original article that I submitted to the magazine.  Of course, they had to edit it a bit and tighten up the language (of which they always do a great job), but I wanted to offer you my original words.  So, here you go!

Goldenrod:  A Plant That Makes Us Whole
By Lindsay (Wilson) Kolasa

In late summer and early fall, splashes of gold begin to line roadsides and strew across fields.  These small yet brilliant yellow blooms atop 2-3’ stems are nature’s last reminder of the summer heat and the long days of full sun as we inch closer to winter.  This persistent plant regally claims its territory and offers some of the last nectar for pollinators.  It also offers us its medicine.

There are many species of goldenrod, a little over 100, and most of those originating in North America.  The two main species used for medicinal purposes in Mississippi would be Solidago canadensis (Canada goldenrod) and Solidago odora (sweet-scented goldenrod).  For the most part, all species are used interchangeably, but some are more astringent (drying) while others are more fragrant (aromatic).

What’s in the name?

Goldenrod was a commonly used plant among the Native American tribes and has many traditional uses in Europe as well.  It’s Latin name, “Solidago,” is broken down this way:  “solida” meaning whole and “ago” meaning to make.  So, its Latin name means, “to make whole.”  After learning some of its medical might, I think you will understand why it was given such a confident name.

When it comes to the variety of ailments goldenrod can be applied to, this plant is a cause for a pause.  Goldenrod has been safely and traditionally used internally and externally for centuries.  The flowers and leaves (and sometimes the roots) are the parts of the plant used.  It’s warming and drying (astringent) properties make it useful for a number of disorders of the body that are cold and wet.  For example you can use goldenrod for sinus infections, flus, yeast overgrowth, and even cold, arthritic joints. 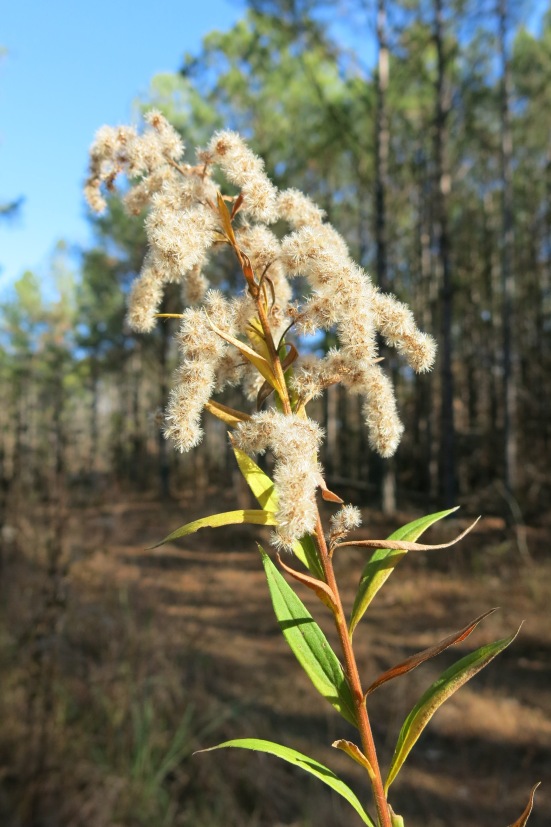 Medicine is always nearby

Similar to dandelion, some herbs are simply overlooked due to their obviousness.  There is some strange phenomenon going on with most of us that if it is hard to find or exotic, it must be good medicine.  If it is nearby, it must not be worth much.  That is simply not true.  My main herb teacher, Phyllis D Light, taught me that one of the principles of Southern Folk Medicine is that our “medicine is always nearby.”  Goldenrod is one of these convenient and extremely useful herbs.

Goldenrod has some historical significance as well.  It was one of the main herbs sipped on by protestors after the dumping of tea into the Boston Harbor in 1773.  These herbs were called “Liberty Teas.”  Sweet-scented goldenrod leaf tea is also called “Blue Mountain Tea” and was sipped on by folks east of the Mississippi River to calm the nerves and settle the stomach.  Goldenrod is a relaxing nervine and an aromatic carminative (relieves gas and “stuck” digestion), so these folk uses completely make sense.

One of its most acclaimed medicinal attributes is its use for kidney issues.  It is commonly formulated in kidney tonic blends to prevent kidney stones, break down kidney stones, and clear urinary obstructions.  Because it is diuretic and anti-inflammatory, it comes in handy for such situations.  Traditionally, herbalists will blend goldenrod with oak-leaf hydrangea root to work on kidney stones and wild yam root to calm spasms.

In this regard, goldenrod is also formulated with anti-microbial herbs like usnea and chickweed for urinary tract infections (UTIs).  Considering that many UTIs are caused by yeast overgrowth, it is important to know that goldenrod specifically addresses gut flora imbalances, especially yeast overgrowth.  It has also been used for thrush.

It’s hard not to talk about goldenrod without debunking an herb myth that floats around every year when it is in bloom.  Let’s just put it this way, the myth floats around, not its pollen.  Many people accuse their pollen allergies in the early fall to the decadent display of its golden yellow blooms which are all too easy to spot (and blame).  However, the pollen granules of goldenrod are large, sticky, and too heavy for wind pollination.  They have to be pollinated by insects.  Near most patches of goldenrod are patches of ragweed (Ambrosia spp).  Its pollen is wind-pollinated (but its flowers are inconspicuous), meaning that ragweed is the culprit for most pollen allergies that time of year.

Contrary to the herb myth, Midwestern herbalist Matthew Wood finds that goldenrod is one of his best herbs for pet allergies, mainly cat allergies.  It is also used for hay fever and general, over-secretion of mucous and red, irritated eyes.  Working on the throat, nose, and lungs, you’ll appreciate the soothing qualities of this herb.  You can take the herb as a tea or tincture.  If you gather the herb to dry for tea, I suggest only drying the leaves as the flowers will simply turn into puffs.

The last application of this herb that I will cover is its topical use.  Externally, it is a great wound-healer.  It is anti-microbial and will staunch bleeding.  You can apply as a fresh plant poultice or infused in oil and made into a salve.  However, it really excels when it comes to healing pulled muscles and repairing damaged connective and muscle tissue.

Infused in a whole oil, like extra virgin olive oil, you can apply this herb, topically, to the troubled area.  To make it even more effective, you can infuse your oil with other herbs like red cedar (warming, circulatory herb), comfrey (tissue healing herb) and horsetail (silica-rich herb).

To end on a sweet note, I want to share an early fall preparation I make with goldenrod each year.  I view it as an herbal tonic to prepare my body for the fall months as I shift away from the summer months.  The anti-microbial, warming, and astringent properties of the plant benefit my overall well-being as the seasons shift.

The preparation is called an oxymel, which is 75% apple cider vinegar (ACV) and 25% local honey.  Oxymels have been traditionally used in Europe for quite some time.  Paired with goldenrod, you can expect this herbal oxymel to help in the expectoration of excess phlegm in the lungs, opening up the air passages, making it easier to breathe.

To make a goldenrod oxymel:

SPECIAL NOTE:  Please be aware that goldenrod contains a naturally-occurring latex.  If you are allergic to latex, you should avoid herbs like goldenrod, wild lettuce, and milky oats. 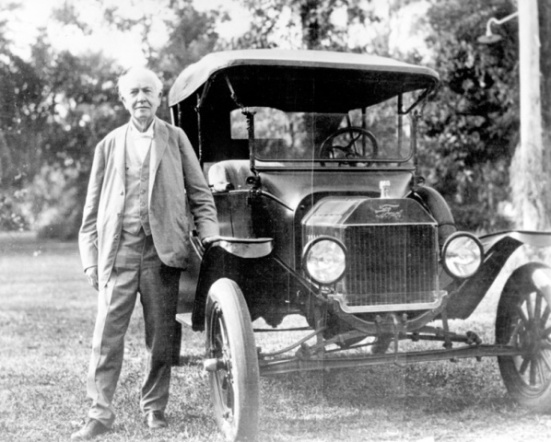 A picture of Edison and the Model T with goldenrod tires

Even though the latex content of goldenrod can be an issue for some allergy sufferers, this high latex content led to some experimentation for rubber production in the early 1900s.  An excerpt from the Wikipedia post on goldenrod reads:

“Inventor Thomas Edison experimented with goldenrod to produce rubber, which it contains naturally.  Edison created a fertilization and cultivation process to maximize the rubber content in each plant. His experiments produced a 3.7-metre-tall (12 ft) plant that yielded as much as 12% rubber. The tires on the Model T given to him by his friend Henry Ford were made from goldenrod.”

And finally, I’ll end this post with a sweet song.

Last year, I co-taught a plant medicine course called Foraged Farmacy.  When we began to teach about goldenrod, one woman’s eyes lit up.  She was from Mississippi and she decided to share a lullaby with us that her grandmother used to sing about this lovely herbal ally.  It’s about the sweetest thing ever.  To honor this participant in our course and her willingness to be vulnerable and sing to us, I’ll call the song, “Jane’s Lullaby.”

Oh tell me sunny goldenrod
blooming everywhere.
Did fairies come
from fairy-land,
to weave the dress you wear?
Or did it come from
mines of gold
that bright & shiny hue?
Or did the baby stars one night
Come down and color you?