Grist mills were once a focal point in any early American community up to about 60 or 70 years ago. However, in just these recent years, people living in America have witnessed such a rapid transition of livelihood, such monuments of our history are easily forgotten; their relevance a ghostly whisper from the past.

In any town, village, or city across countries and across continents whole grains have served as a necessary part of providing sustenance and life. The word I would like to associate with grist mills of our early American experience is exactly that — sustenance — they were an integral part of everyday life.

They were places of gathering and community. They provided fresh ground grain which is unheard of or almost inaccessible in this day and age. The nutritional potency of fresh ground grain is far greater compared to what we find on the shelves of the supermarket. Store-bought white flour is nothing short of dead (ok, maybe a bit dramatic ~ how about barely kickin’?).

There are practically no nutrients left in this supermarket, over-processed flour (that’s why it always needs to be fortified!). As a food activist, it doesn’t take much to see realize that the agro-industrial complex has become such an insatiable creature, that mills like this are almost extinct. It’s not pretty folks. 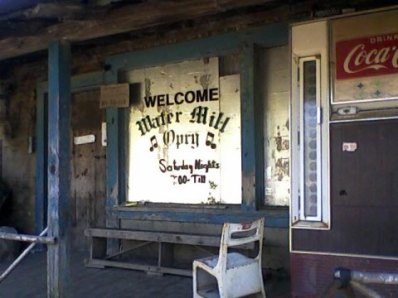 I visited Sciples Mill in Dekalb, Mississippi today, actually. My mother took me to this mill when I was in middle school. I still remember the trip. We hung out with Edward Sciples, the owner, and he showed us around. My grandmother and sister were with us as well. I actually still have an old picture of us sitting in a pile of grain sacks (my sister in I in peg-leg rolled jeans and baggy sweatshirts).

At that time in my life, the grist mill didn’t mean much to me. It was one of those trips that my mom thought would be enriching for her children. I had no idea what kind of role a grist mill served in a community. And, I barely knew to ponder on the origin and quality of my food.

Flash forward about 20 years, and the grist mill takes on an entirely new meaning. I am currently visiting my mom in Mississippi for a couple of months as I’m about to move to Western North Carolina.  After living in San Francisco and Eastern Europe for the past 10 years, I realize that much of my time and energy has been concerned with food and how I feed myself.

This makes sense considering the swirl of fashionable foods, diet fads, and ways of eating that I have diligently kept at arms length while bush-waking through the world to find my own way of eating. Jessica Prentice in her book “Full Moon Feast” writes about her troubled relationship with food as a youth and how isolated she felt in her struggle to feed herself and feel satisfied. She says that “it never occurred to me that all of America might be suffering from what journalist Michael Pollan would later call ‘our national eating disorder.'”

While living in Ukraine (through Peace Corps), I ate with the seasons for the first time in my life. Not because I wanted to, but because I had to. Luckily, the Uzbekistani family I was renting the apartment from left me loads of preserved vegetables and fruits. They said that I could eat anything I wanted to. And, when Winter showed its true colors, I felt very grateful that I had so many yummy preserved foods. There was literally only onions, potatoes, cheese, meat, and bread at the local markets.

Even though Ukraine was undergoing severe economic and cultural troubles — the importance of eating with the seasons and knowing how to live in accordance with the seasons was very palpable.  I would have never willingly learned that lesson in America because I had anything I wanted whenever I wanted it.

That is what Ukraine offered me — perspective. The experience allowed me to drop into a closer connection with abundance and scarcity. I began to look forward to Spring again because the longing for fresh fruit was powerful (think:  fresh sour cherry verenikki — dumplings!). I began to understand the art and beauty of longing.

After living in Eastern Europe, I ended up in San Francisco (I wanted good food, music, and a non-profit job). Immediately, I was introduced to the permaculture movement and that set the pace for my 7 years in the Bay Area. Ukraine taught me the importance of community and food (basic needs) and San Francisco taught me about the nuts and bolts of these needs: gardening/farming, preparing food and medicine, and food policy issues. These lessons will always be close to my heart — well, maybe I should say my gut. And, following my gut has never made as much sense as it does to me now.

So, being a good food activist (and devotedly following my gut), I asked my mom to take me to Sciples Mill, an old, water-powered mill. It’s about a 20 minute drive from where the house is. After double-checking our directions with a man in hunting gear at a gas station we found the mill.

There she was! Water-powered and turning a 250-300 horse-powered Leffel Turbine Wheel. Ok — I don’t know what that means, but I did see that written somewhere and thought it would be relevant to the story. The turbine was actually made of wood pre-1880, though. The water runs down from some fresh-water springs from the hills above the mill.

As we drove up to park near the old store across the street, Edward the mill-man, barreled through in his van and almost took us off the road. Mom said that was him — the mill-man. And, that seemed appropriate considering that he wheeled around like he definitely knew the place.

The mill was built in 1790 by a Dr. Hunnelly who was from “Watree River Country of Kirshow County, South Carolina.” The Sciples family bought the mill around 1830 and the mill has been passed down for about 5 generations in that family. The mill mostly ground corn and sometimes wheat; they also ginned cotton and sawed lumber.

On the way to the mill, mom was describing Edward’s business model. It’s basically an honor system. Supposedly, he mills mostly corn for locals and saves a cut for himself that he packages and leaves outside. A person can just drive up and leave some money in the “honor box.”

My mom and I bought some grits and yellow corn meal and left our money in the honor box. I love the honor box thing. 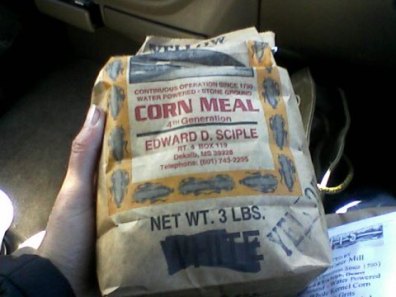 Why is this so satisfying!? Who the hell knows. Well, I guess I do know. There are layers to this transaction: a native, traditional food adopted by European colonists, a energy-efficient water-powered mill operating since 1790, family-owned and operated for 5 generations, and a locally produced food (however, I don’t know the varietal of corn — genetically-modified??? don’t know). That’s why it felt good.

And, I’ve been making tons of cornbread since this recent Thanksgiving due to an amazing recipe that has fallen into my lap:

Stir this together. Then stir in:

Cook in a round skillet at 425 for 30 minutes. I would suggest mixing honey and butter together to slop on the cornbread. Take my word for it… The first few times I made this cornbread, I bought Fully Belly Farm cornmeal from Bi-Rite Grocery in San Francisco.

Now back to Sciples… I also discovered they have live music every Saturday night at 7 pm. My mom can’t remember if this still goes on in the Winter months. I heard there’s a lot of “good clean fun” being had. 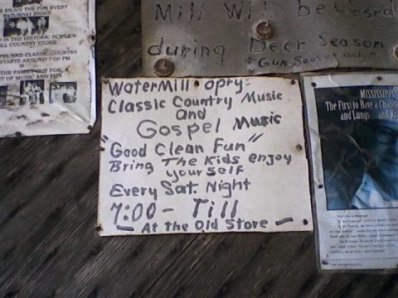 I would love to know if this mill could be supported by the community more. Maybe he could get historic recognition?

Here’s a little poem written by Edward that’s outside his mill door:

This little hamlet called Sciple’s Mill
Surely must have been the Master’s will
Tho’ the timbers are worn from rain and storm
The turbines still turn to grind the corn
The water ripples as it flows along
The birds chirp and sing their song
It is so quiet, so peaceful and still
It surely must have been the Master’s will
To have a place like Sciples’ Mill

The local Southern herbalist and storyteller Doug Elliot read this blog about the grist mill and enlightened me on the topic of pellagra. Pellagra is a disease that occurs when someone is deficient in Vitamin B3 (Niacin). Turns out that maize (corn) of the Americas was gladly adopted by the colonists, but they neglected to integrate the process of nixtamalization in preparing corn.

Lime or ashes are used in nixtamalization to allow niacin to release and become available. The Southeast was especially affected by pellagra due to its dependence corn in its diet. Epidemics also erupted in areas of Europe that adopted corn into their farming rotations and diets. As Doug said, it’s just more “grist for the mill.”

Yesterday, I read a simple way to nixtamalize your cornmeal. Sally Fallon, in her monumental book Nourishing Traditions, soaks cornmeal in 2 tsp of dolomite powder the night before. Basically, you mix buttermilk, cornmeal and dolomite OR water, whey (or yoghurt), and dolomite and let it sit for the night. In the morning, you can prepare your cornbread or corn muffins. Generally, it is good to let the mixture sit 7-8 hours.

5 thoughts on “Grist for the Mill”